This is the first post in a series of three (or maybe four later) based on diagrams I collected while debugging the Cylc scheduler. The scheduler is called by the cylc start utility.

Instead of going at length on what happens (and there is quite a bit happening when you run cylc start my.suite), I will use the following diagram, followed by a few paragraphs to highlight certain parts. The code used was based on Cylc 7.7.1.

ImportError when debugging cylc in Eclipse

Since I started reading cylc’s source code in Eclipse to create some sequence diagrams, I have not been able to debug it properly without hitting errors in some part of the program execution.

The error message was “ImportError: cannot import name _remove_dead_weakref”, which was a bit enigmatic as I never heard about that function, but it seemed to be something internal, or at least not from the project code base. And searching the Internet did not help much.

I have been writing more suites for cylc lately, and found an example that has proved to be useful for debugging certain parts of the code.

It is an extremely simple suite, similar to what is in cylc’s documentation. It sleeps for N seconds, and prints a message.

In theory, that happens before you upload a Turtle file, but this post series won’t follow a logical order. It will be more based on what I find interesting.

Oh, the dataset created is an in-memory dataset. Here’s a simplified sequence diagram. Again, these articles are more brain-dumps, used by myself for later reference. 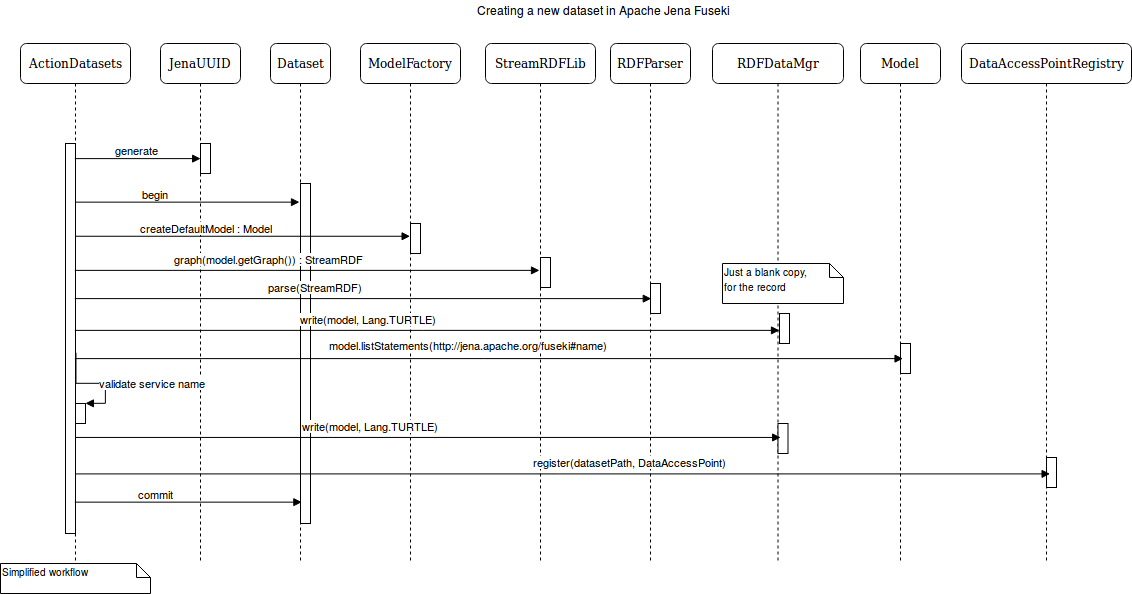 I am working on an issue for Skosmos that involves preparing some Turtle files and uploading them using Apache Jena Fuseki’s web interface.

The issue is now pending feedback, which gives me a moment to have fun with something else. So I decided to dig down the rabbit hole and start learning more about certain parts of the Apache Jena code base.

This post will be useful to myself in the future, as a note-taking in a series, so that I remember how things work - you never know right? But hopefully this will be useful to other wanting to understand more about the code of Apache Jena.

Knowing a bit of the code base, I went straight to the SPARQL_Upload class, from the Fuseki Core module. Set up a couple of breakpoints, uploaded my file, but nothing. Then tried on its package-neighbour class, Upload.

Actually, it is easier to understand seeing the class hierarchy, and knowing that when I run the application in Eclipse, it is running with Jetty, serving servlets (there is no framework like Wicket, Struts, etc, involved).

Several filters are applied to the HTTP request too, like Cross Origin, Shiro, and the FusekiFilter. The latter looks at the requests to see if it includes a dataset. If a dataset is found - it is in our case - then it hands the request over to the right class to handle it.

REST_Quads_RW will take care of the upload action, using the Upload class where my breakpoint stopped.

Upload#incomingData() starts by checking the Content Type from the request. In my case it is a multipart/form-data. Then it calls its other method #fileUploadWorker().

#fileUploadWorker() creates a ServletFilterUpload, from Apache Commons FileUpload. With that, it opens a stream for the file, retrieves its name and other information, such as the content type.

Well, in this case we are getting a Lang:Turtle. So it now knows that it has a Turtle file, but it still needs to parse it.

Upload calls ActionLib#parse(), which uses RDFParserBuilder to build a parser. It applies a nice fluent API design when doing that.

Side note to self: the `RDFParser` has a `canUse` flag. It seems to indicate the parser can be used just once. Though it looks actually it works until the stream is closed...

ARQ is a low level module in Jena, responsible for parsing queries, and also some of the interaction with graphs and datasets.

LangTurtle extends LangTurtleBase. Their task starts by populating the prefixMap, which contains all those prefixes used in queries like rdfs, void, skos, etc.

Then it will keep parsing triples until it finds an EOF. For every triple, after the Predicate-Object-List is found, it calls LangTurtle#emit().

The #emit()method creates a Triple object (Jena Core, graph package). And also a StreamRDFCountingBase to keep track of statistics to display back to the user. 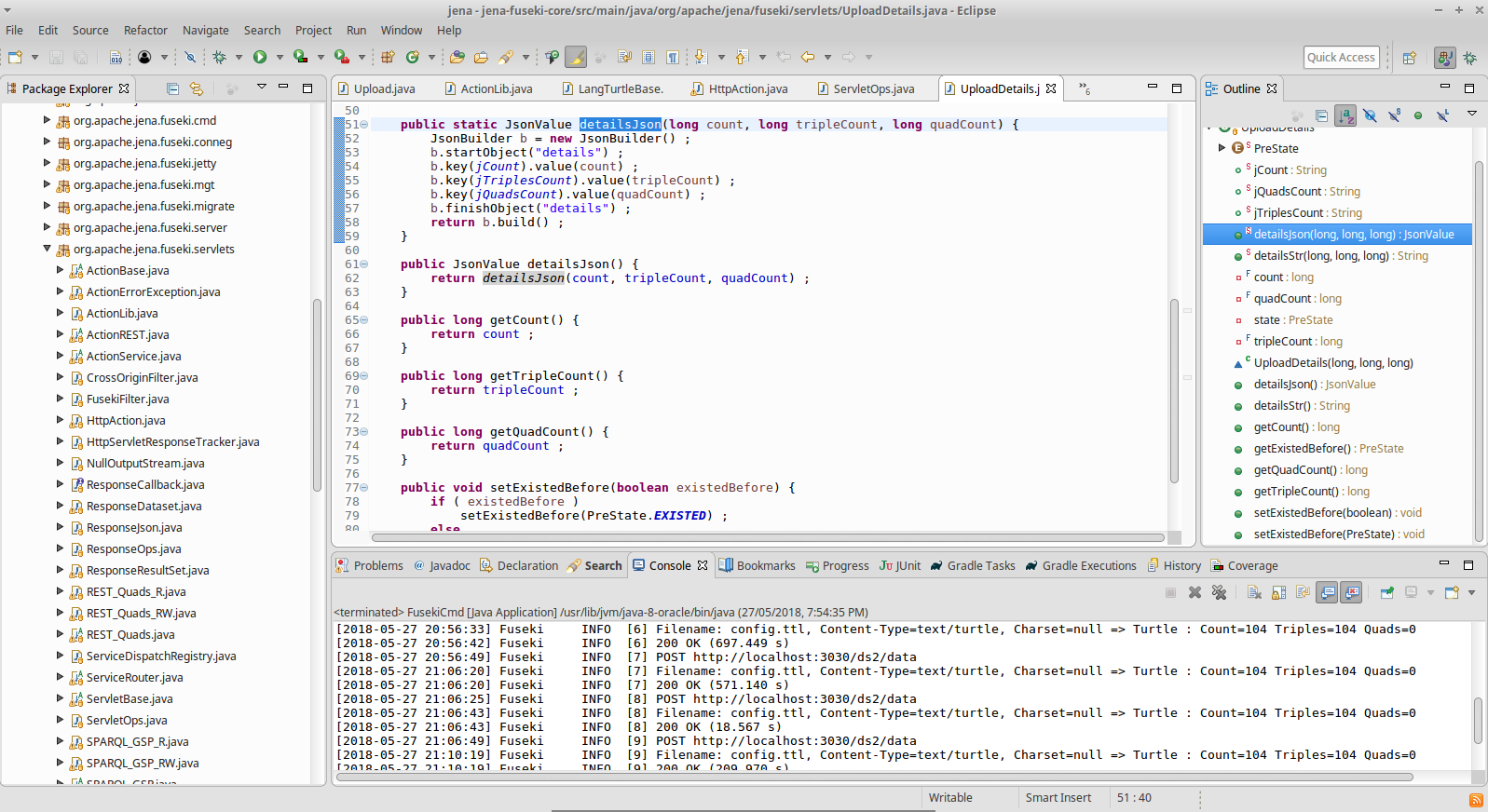 ParserOutputDataset holds a reference to the DatasetGraph and also to the prefixMap populated earlier in LangTurtle. For each Triple that we have it will call the DatasetGraph#add method, creating a new Quad with the default graph name.

Finally, readers and streams are closed. An UploadDetails object is created holding stats collected in StreamRDFCountingBase, which are also used for logging.

Upload#incomingPath() will return the UploadDetails. If there are no errors then the transaction will be committed. It involves again classes from ARQ and TDB (for journaling), but that will be for another post.

The final method called in the Upload class will be detailsJson(), which returns the object as JSON. This JSON string is then finally returned to the user.

So that’s it. Probably the next step will be to learn how DatasetGraph works, or maybe more about transactions in Jena.