Last month I attended the II Sao Paulo Perl Workshop, where I had the privilege of learning with the great talks performed by bryan d foy, Brad FitzPatrick and Larry Wall. For being a Java programmer, you can imagine how lost I was feeling there.

The first programming language that I had contact with was Perl. I was a 16 years old Slackware aficionado at that time, and was dying to have a web site with a guestbook . We did not have any cheap hosting services in Brazil that offered a PHP environment, but there were few companies that offered a free host with ads, and with Perl. I don’t remember which script I used, only that I found it in HotScripts.com and that it stored the guestbook entries in disk. Now, ten years after, here I am playing with Perl again! :-D 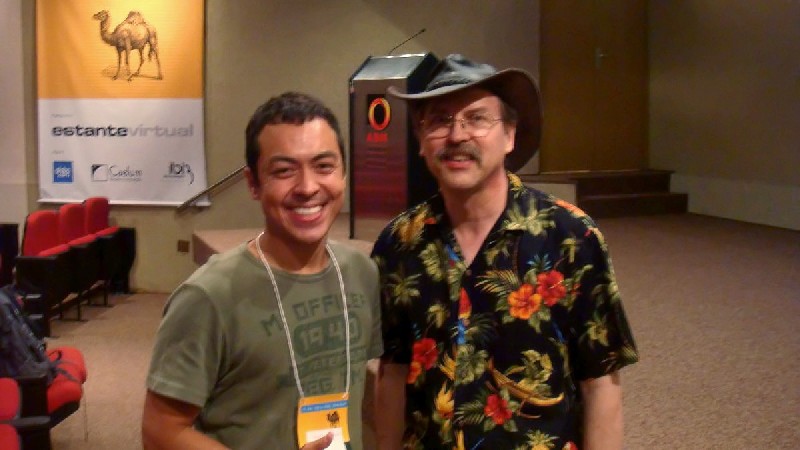 During my four years in Mackenzie University, the programming language that I used the most was C, and the script programming language was Shell. After the talks in the workshop, I realized that Perl has the best of both worlds, but its programs do the same thing with less lines of code in C and it has more modules and is more powerful then Shell.

I still think Perl is complicated, but depending on who wrote the code. :-) I found some nice code in CPAN to start playing with. Neat and easy to understand and modify/maintain.

I have a bunch of programs that I use to automate some tasks or simply customize my environment (turning a folder in a PHP project for Eclipse, for instance). As I use Windows and Ubuntu, I have C programs and Batch and Shell scripts that I use in both environments. I am slowly migrating my C and Batch and Shell scripts to Perl when applicable. This will save me time compiling my C code for each OS, and will replace some scripts that were getting too long and complicated.